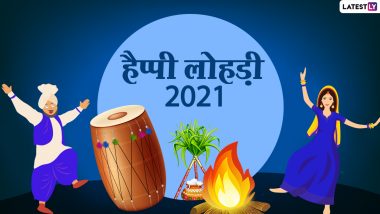 Lohri 2021: Tonight Lohri will be celebrated with great pomp in entire Punjab and Haryana. People start sending sweets and good wishes to their favorite friends and relatives from the garden evening itself, and get the blessings of the elderly. Lohri is also seen as a symbol of the arrival of winter and the arrival of spring. In Lohri night fire, farmers offer Rabi crop. Only after this harvesting of the crop is started. The gods are offered the enjoyment of crops through fire and pray to God for wealth and prosperity.

After this, women, men and children dance around the sacred fire and sing folk songs. This festival is also seen as the arrival of winter and the arrival of spring. Traditionally Lohri is associated with harvesting and sowing of crops. This day is considered very important for any Punjabi or Sikh. It is said that Lohri night is the coldest and longest night. Let us know what is the reason for lighting fire on Lohri night and what is its traditional folk tale. Also read: Happy Lohri 2021: When is Lohri, know its auspicious date

Importance of fire on Lohri

On the night of Lohri, the family and the people of the neighborhood light the fire in the open space, and ask prayers to the fire god for the well-being of his family, revolving around the fire. After offering maize, ravadis, peanuts, lava, etc. to the lit fire, they distribute it as offerings and eat it themselves. People gather around Agni Dev and dance at ‘Dulla Bhatti’ and listen and tell their stories.

It is mentioned in Hindu scriptures that King Daksha, who did not like his son-in-law Lord Shiva and daughter Sati. He organized a huge Mahayagya in his kingdom and invited all the gods and goddesses but did not insult his daughter and son-in-law. Sati found it very bad. When Sati reached the yagna program to ask her husband and the reason for not inviting herself, Raja Daksha started telling bitter words to Lord Shiva in various ways. The bitter things from the father’s mouth for the husband could not tolerate Sati and he gave his life by jumping in the same yagya.

When Lord Shiva got the news of the death of mother Sati, he got angry and burned the Mahayagya by burning it. Lord Shiva carried out the whole universe by taking the dead body of Mother Sati. It is said that since that day, the tradition of lighting fire on Lohri has been going on in memory of Sati. It is said that people light the fire and remember Goddess Sati and Shiva. They consider them as ideal husband and wife and worship them. She considers Shiva-Sati as a symbol of love, dedication and sacrifice, so when a new couple in a family comes to the wedding, they are given a special offering at Lohri, they are asked to worship ‘Lohri’.