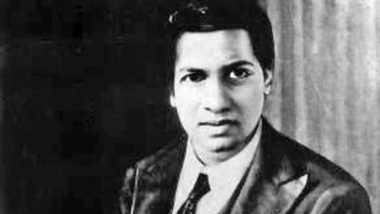 On 26 December 2011, the then Prime Minister, Dr. Manmohan Singh paid tribute to Srinivas Ramanujan at the 125th birth anniversary celebrations in Chennai, expressing concern over the lack of qualified mathematicians in the country, saying that Srinivas Ramanujan’s extraordinary talent was second to last century. The decade gave a new dimension to the world of mathematics. In order to remember and honor Ramanujan’s unforgettable contribution to Mathematics, it was decided to celebrate ‘National Mathematics Day’ every year on 22 December on Ramanujan’s birthday, with 2012 also being declared as the National Mathematics Year.

Special things related to Ramanujan’s life Ramanujan made amazing contributions to mathematical analysis, infinite series, number theory and constant fractions and also introduced many equations and formulas. He was a world-renowned mathematician who made unforgettable contributions in various fields and disciplines in the branches of mathematics and whose efforts and contributions gave a new meaning to mathematics. His discoveries ‘Ramanujan Theta’ and ‘Ramanujan Prime’ inspired researchers from all over the world for further research and development on this subject.

Born on December 22, 1887 in Erode city of Tamil Nadu, about four hundred km from Madras, Srinivas Iyengar Ramanujan’s childhood was spent in times of hardship and poverty. By the age of three, he could not even learn to speak and then the family members started worrying that he might not be dumb but who knew that this child would do such a great work in the field of mathematics that for centuries the world would respect him- Will remember with respect. His childhood was spent in such deprivations that he often read books in school by asking his friends. He was so interested in mathematics that he used to get hundred per cent marks in mathematics, but he was hardly able to pass the exam in the rest of the subjects because he did not feel like in other subjects besides mathematics.

At the age of 10, he got the highest marks in Mathematics in the entire district in the primary examination. Ramanujan was so fond of mathematics at the age of 12 that he had mastered trigonometry at the age of 12 and developed many theorems from his mind without anyone’s help. He had never taken any kind of training in mathematics. During school days, he received several merit certificates and academic awards for his talent.

In the year 1904 he was awarded for his matchless contribution to mathematics. The Ranganath Rao Award was also given. He was awarded a scholarship to study at Government Arts College, Kumbakonam, but his love of mathematics had grown so much that he had stopped focusing on other subjects. He used to solve mathematics questions in classes of other subjects also. As a result, he failed in all subjects other than Mathematics in the 11th standard examination and due to this the scholarship given to him was discontinued. The financial condition of the family was not well already.