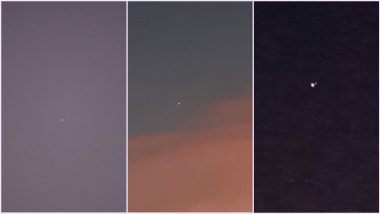 Winter Solstice Great Conjunction 2020 Photos: Nearly 800 years later, on December 21, the amazing combination of Jupiter and Saturn was seen in the night sky. On the night of December 21 (Monday), this great combination between Jupiter and Saturn is called Winter Solstice Great Conjunction. This is an extremely rare event, when this combination of Jupiter (Jupiter) and Saturn (Saturn) appeared like a Christmas star in the sky. After about 800 years, these two planets came so close to each other and this sight looked like a Christmas star. This event is also called Christmas Star or Star of Bethlehem.

To see this incident, people kept their eyes on the sky, the people who saw this rare sight, captured captivating pictures of it and shared it on social media. #jupitersaturnconjunction, #ChristmasStar is trending on Twitter with pictures of Great Conjunction. Also Read: Winter Solstice Great Conjunction 2020 Live Streaming: Jupiter and Saturn Will Look Like Christmas Star Tonight, Watch Live Here

Jupiter and Saturn align every 20 years or so-called ‘great conjugation’, but Monday night it has been the closest planet since 1623. In fact, the two planets are about 400 million miles away from each other. From the point of view of the earth, they appear as one or a double star. Many channels did live streaming of this celestial activity. Let’s take a look at this amazing pictures of this incident which are going viral on social media. Also read: Jupiter & Saturn ‘Great’ Conjunction 2020 NASA Live Streaming: Jupiter and Saturn to meet as Christmas stars, watch this celestial event live

#jupitersaturnconjunction on Dec 20. Getting close! Took some fine balancing of exposure to get Jupiter’s dim moons and Saturn’s rings to come out on one image. Photo taken in S Fla with D500 and #Nikon 200-500 lens at 500mm. #nikonphotography pic.twitter.com/KVpHVQ1gt3

Great combination of Jupiter and Saturn

The day of Winter Solstice and the Great Conjunction. #jupitersaturnconjunction pic.twitter.com/5C6I9IjP9A

The Great junction is here …….#jupitersaturnconjunction

However, those who did not see the Christmas star shining in the sky, undoubtedly missed witnessing this amazing event, but through these pictures going viral on social media, it can be seen how amazing it must have been. If you have a telescope, you must have seen the great combination of these two planets differently. Significantly, next time this great conjunction of Jupiter and Saturn will be seen in 2028.

COVID-19: How to increase oxygen level in blood? What is the role of blood, know the opinion of health experts

Ram Navami 2021: 9 powerful spells named Prabhu ‘Shriram’! Whose problems are overcome by chanting! Know which power is in which mantra?

Homeopathic death of actress Arya Banerjee does not confirm autopsy

Endometriosis affects 1 in 10 women like me. Yet it often takes a decade to be diagnosed.

To go all-electric by GM 2035, phase out gas and diesel engines

Billy Illish Birthday: In a bubbly style, his outlandish style is always our vote...