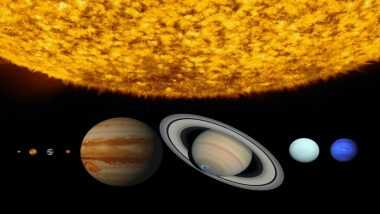 In fact Jupiter and Saturn will be 400 million miles away from each other. Although they will appear very close to each other from the earth. These will form a bright point of light in the night sky, which will be visible from the earth. It is called the ‘Star of Bethlehem’ or ‘Christmas’ Star, which is mentioned in the Gospel of Matthew in the Bible. NASA has named it the connection between Jupiter and Saturn as ‘the Great Conjuction’. Also read: Happy Winter Solstice 2020: Twitter users shared this image on the winter solstice of two planets

The Great Conjunction will appear one hour after sunset in the southwest sky. Both planets will shine as bright stars and are easily visible to the naked eye. In India, this astronomical event can be seen tonight between about 6:30 pm and 7:30 pm. Saturn will appear slightly to the left of Jupiter and the planets will eventually change positions in the night sky.

Live streaming of Jupiter and Saturn’s Great Conjunction in India:

NASA will host live streaming of Great Conjunction tonight. They have been organizing a live session for three days and are explaining this event in great detail.

Several other channels are also live streaming this rare phenomenon. The Jawaharlal Nehru Planetarium in Bengaluru has arranged to see this celestial conjunction of the planets Jupiter and Saturn on Monday. He has also shared a live page on his Facebook page.

To see this phenomenon with the naked eye, NASA recommends choosing a place where you will get an unobstructed view of the sky. You can use the sky map apps to find the position of the planets and see them at night. Both planets are so bright, they can be seen from anywhere. Do not forget to see this rare celestial event, because it will happen in 2080 next time.