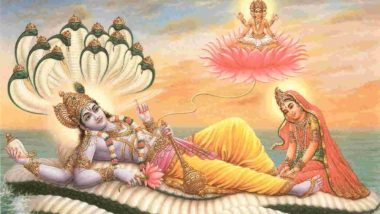 Chant these mantras to awaken God:

On this day Lord Vishnu wakes them up by saying, ‘Arise God to us, Arise favored us’. On this day, awaken Lord Vishnu with the source text, conch, bell sound and bhajan kirtan.

Draw the shape of Lord Vishnu’s feet in or out of the courtyard of the house.

Draw Lord Vishnu from ocher in an Okhli.

Now keep fruit, sweet singhara and sugarcane near Okhli. Then cover it with a basket.

Light the lamp outside the house and at the place of worship at night.

On this day all members of the family should worship all the gods including Lord Vishnu.