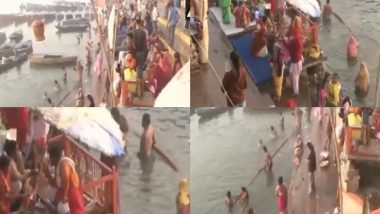 Dev Uchani Ekadashi and Tulsi marriage falls in the month of October-November every year. This festival is celebrated mainly in places like Uttar Pradesh, Bihar, Jharkhand, Maharashtra etc. Dev Uttani Ekadashi is celebrated four months after Dev Shayani Ekadashi. After this all big, religious and auspicious works begin. From marriage to marriage to home entry etc., auspicious time starts for Mars work. On this day, people take bath in the Ganges in many parts of the country. After bathing in the Ganges, do charity work like charity. Today, devotees are taking a bath in the Ganges River in Uttar Pradesh on the occasion of Ekadashi and Dev Uchaani Ekadashi and Tulsi marriage of Shukla Paksha of Kartik month. A crowd of devotees was seen taking a bath in the Ganga river of Varanasi on this date festival. One devotee said that, “On this day people do charity work by taking bath etc. and do Tulsi marriages in their homes.”

#WATCH | Uttar Pradesh: On the occasion of Ekadashi and Dev Utthan Ekadashi of Shukla Paksha of Kartik month, devotees taking a bath in the Ganges river in Varanasi.

One devotee told, “On this day, people take bath and do charity work and perform Tulsi marriages in their homes.” pic.twitter.com/ZD7skFxfqx

According to the Vaishnava sect this year, Tulsi marriage will be celebrated on the Gregorian date 26 November. However, those who observe Dev Uthani Ekadashi or Prabodhini Ekadashi Vrat (Devotthan Ekadashi Vrat) on 25 November will celebrate Tulsi marriage on the same day. The wedding season begins in India with the day of Dev Uthi Ekadashi and Tulsi wedding. Usually weddings and other auspicious ceremonies such as mundan, grihapravesha etc. do not occur during the Chaturmas period which includes Shravan, Bhadrapada, Ashwin and Kritika month. With this Ekadashi date, the period of Chaturmas ends and the auspicious celebrations season begins.

Tonight people will celebrate the festival of Tulsi wedding in their homes. Tulsi will be worshiped just like on a normal day and in the evening they will be married to Shaligram with full custom. On the day of Tulsi wedding, the Tulsi plant will be decorated like a bride and Shaligram will be decorated like a groom. All the rituals of an Indian wedding will also be played in this marriage.

February 26, 2021 Horoscope: know how it will be today, what amount of luck will shine

No Time to Die: Daniel Craig’s Bond film which released in April 2021 is expected to be delayed again

Trump fared better in most counties with larger rallies

Hopes for survivors were erased as airplane wreckage, which was found off the Indonesian coast

Bigg Boss 14: Jasmine Bhasin tags Rubina Dilac as manipulative, seems to be her...

Deepawali 2020: Adopt these tips of Vastu Shastra, Goddess Lakshmi will...