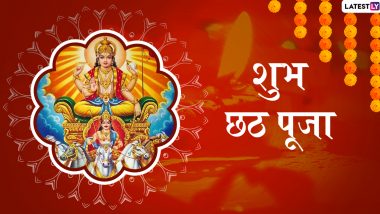 Chhath Puja 2020: Today (20 November 2020) is the third day of Chhath Puja Mahaparva (Chhath Puja Mahaparv) and today will give Sandhya Arghya to Surya Dev (Surya Dev) in the evening. According to Hindu Panchang, this Mahaparava is celebrated every year on the Shashthi Tithi of Shukla Paksha of Kartik month. The four-day Chhath Puja festival includes Nahai Khay on the first day, Lohanda Kharna on the second day, Sandhya Arghya on the third day and Usha Arghya on the fourth day. In Chhath Puja, Lord Surya and Chhath Maiyya are worshiped. It is believed that by worshiping Suryopasana and Chhath Maiya, devotees get blessings of health, wealth, happiness, prosperity and prosperity. The rules related to this festival mainly celebrated in Bihar, Uttar Pradesh, Jharkhand are very strict and this fast is considered to be the most difficult fast. It is believed that Draupadi, wife of Pandavas, performed Chhath Puja. Let us know who is Chhath Maiya and the legend of this fast.

Who is the sixth mother?

According to mythological belief, Chhath Puja began in the Mahabharata period. Surya Putra Karna used to stand in water till the waist for hours every day and offer arghya to the sun god and did not return any yachters empty-handed after the puja. It is said that when the Pandavas lost all their Rajapatas in gambling, Draupadi fasted Chhath Puja to reclaim the lost Rajpat and to overcome the calamity of the Pandavas. Draupadi’s wishes were fulfilled due to the effect of Chhath Puja fast and the Pandavas regained their Rajapat.

According to the legend associated with the Chhath Puja fast, the king named Priyavrat and his wife Malini were very unhappy because they had no children. With the desire to have children, she performed a son-sacrifice sacrifice with Maharishi Kashyap, as a result of which the queen became pregnant. Nine months later the queen gave birth to a dead son, which made the king very sad. In the grief of the child, he made up his mind to commit suicide, but when he was trying to commit suicide, a beautiful goddess appeared in front of him. Also read: Happy Chhath Puja 2020 Greetings: Wish your loved ones of Chhath Puja in Bhojpuri, Send these love filled WhatsApp Stickers, GIF Images, Facebook Messages, Quotes and Wallpapers

Devi told the king that she is Shashthi Devi and gives people the good fortune of the son. He said that whoever worships him with true devotion, he fulfills all his wishes. Shashthi Devi said that if you worship me, I will provide you with the son Ratna. After this, according to the Goddess, the king fasted on the Shashthi Tithi of Kartik Shukla and performed Chhath Puja with full legal practice, due to which he got the son Ratna.

Devi told the king that I am Shashti Devi. I offer people the good fortune of the son. Apart from this, I fulfill all the wishes of the person who worships me with a true spirit. If you worship me, I will give you the son’s gem. Impressed by Devi’s words, the king obeyed her. It is believed that since then the holy festival of Chhath Puja started being celebrated.

Tulsi Vivah 2020: How to decorate a basil pot for a Tulsi-Shaligram wedding, see easy and traditional ways of decoration

Tulsi Vivah 2020: Why is it important to have Tulsi at home, know what are its benefits?