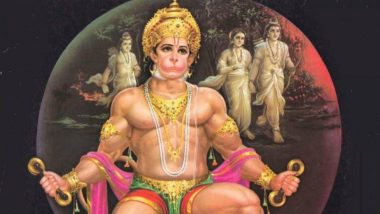 It is important for the Hanuman Jayanti to observe Brahmacharya on this day. On the day of Hanuman Jayanti, wake up in the Brahma Muhurta in the morning and take bath and meditate on Shree Rama, Mother Sita and Hanumanji. After this, after bathing the idol of Hanuman Ji with Ganga water, worship it with the whole method. Offer a red colored flower, sandalwood with saffron, Akshat, Roli, vermilion, laddu on the idol of Hanuman by lighting incense and lamps. After this, recite Hanuman Chalisa and Bajrang Baan. Finally, perform the aarti of Hanuman ji. On this day, offering vermilion to Hanuman ji fulfills all desires.

Also read: Buy gold in this auspicious time on Dhanteras, money will rain in the house

According to mythological texts, Lord Shiva is the 11th Rudra avatar. In the context of the birth of Hanuman Ji, it is mentioned that when the sea churned between the gods and the asuras, the asuras that came out of it were tricked by the asuras. On this, Dev and Asuras started fighting among themselves. Lord Vishnu took the form of Mohini and appeared among the gods and asuras to get the nectar urn from the asuras. It is said that Lord Shiva got distracted after seeing the saint form of Lord Vishnu. With this, the semen sacrificed by Shiva, made him enter the womb of Anjana, wife of Pawan Dev Vanararaj Kesari. In this way, Kesari Maruti Sankat Mochan Srirambhakt Hanuman was born from the womb of Mata Kesari.

A legend is prevalent in this context. One day when Maruti woke up in the morning, he got very hungry. He saw a ripe red fruit on a nearby tree. Maruti rushed to break the fruit. In fact, what he considered to be the fruit, he was actually Suryadev. It was the new moon day. At this time Rahu was about to eclipse the sun, but before that Hanuman ji swallowed the sun. Rahu was worried about what happened. He talked to Indra. Indra first explained to Maruti. Indra then hit Maruti on the face of the barge, when Suryadev was freed. But due to the strike of Maruti, Maruti fainted and fell on the earth from the sky. Individed by this act of Indra, Pawan Dev goes into a cave with Maruti and becomes impatient. As soon as Pawandev intervenes, there is a tussle between the animals and animals on the earth. All the gods started praying to the wind god that he should give up his anger and let his life flow on the earth. All the gods bestow all the divine powers as a boon to Maruti, as well as grant them a boon to be revered by the name Hanuman. From then on, he had Hanuman instead of Maruti. It is also mentioned in Tulsidas’s Hanuman Chalisa.