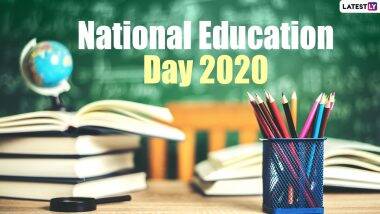 On September 11, 2008, the Ministry of Human Resource Development decided to celebrate the birth anniversary of Maulana Abul Kalam Azad as National Education Day. Like every year, this year, on 11 November 2020 (Wednesday), this day will be celebrated all over the country. Also read: Children’s Day 2020: Children’s Day on these Hindi WhatsApp Stickers, Facebook Greetings, Wallpapers to tell children Happy Children’s Day

History and importance of this day

Maulana Abul Kalam Azad was the first Education Minister of independent India. He took over from 15 August 1947 to 2 February 1958 as Education Minister. He founded the University Grants Commission, or UGC, after independence. Maulana Azad was the youngest president in the Indian National Congress. Maulana Abul Kalam Azad was a famous Indian Muslim scholar. He was a famous poet, writer, journalist and Indian freedom fighter. He established higher education institutions and worked for free education in the country.

In 2008, the Minister of Human Resource Development decided that on 11 November, the birth anniversary of Maulana Abul Kalam Azad will be celebrated as National Education Day. His contribution to the education sector of India is remarkable, which can never be forgotten. On this day seminars, workshops and programs are organized by various educational institutes of the country.